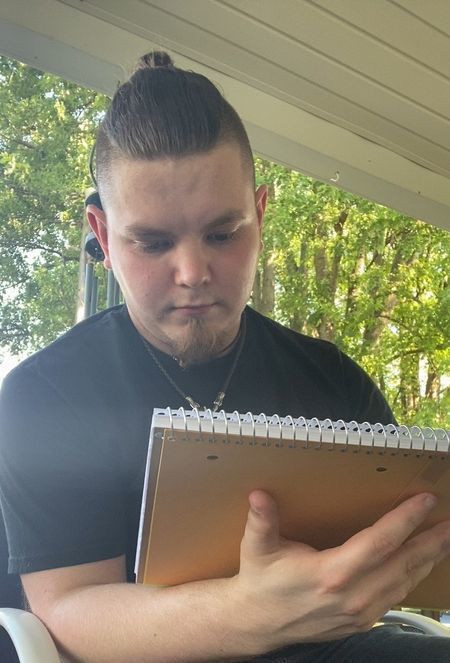 Wesley Gilpin has eyes on the promise and potential of a future that didn’t always seem possible. Steffan Chirazi learns about his journey.

Words of wisdom, and frankly, given 21-year-old Gilpin’s background, the sort of smart, optimistic, and utterly positive philosophy that you feel could empower so many more like him all over the country. You see, Kentucky-based Wesley is one of the recipients of a Metallica Scholars grant, and he’s gone beyond just seizing the opportunity to get qualified in a pretty progressive industrial field. He has grabbed and throttled the damn thing for all its worth, squeezing every last ounce of “tunity” out of that opportunity, making sure that nothing is left behind in the pursuit of a career in computerized manufacturing and machining.

“I am getting my Associate of Applied Science [AAS Degree] for computerized manufacturing and machining. That’s everything from making the blueprints to reading them, to running the machines whether it’s a mill, a C&C, 3-D printer… the whole nine yards,” says Wes confidently as your humble editor ponders how a kettle works. This sort of mind is both specific and unique; thus, I was interested to know when Wes first became interested in the field?

“Well, from when I was real young, I wanted to be a scientist. I always had this fascination with building stuff, taking things apart, and putting ’em back together,” he explains. “Many a time, I’d take stuff apart and didn’t know how to put it back together, which got me into trouble as a child, but I just wanted to know how to do it. How do things work? In high school, we had a CADD [computer aided drafting and design] class, which was a lot of making blueprints, drawing the blueprints, and describing everything, which was fun, but I liked the other side of that too, the more mechanical.”

I have to ask, what did you take apart as a kid that got you into trouble?

“I took my Grandma’s computer apart when I was about five or six. I helped repair a couple of my uncle’s watches. Then I was into tractors and old cars. It was a little easier with people like my stepdad and my papa helping me because they knew what I was supposed to do. They were just showing me how to do it.

“I grew up originally out in Boston, Kentucky. It’s a small little town. It has, like, one gas station and not even a traffic light, but a caution light, the little yellow ones that blink. There’s not too much going on out there. But as I got closer to college, we moved to Bardstown, which is the bigger city right next to it. It’s also the bourbon capital of the world and the most beautiful small town in the country. It’s got a couple of different titles and a lot of really old historic buildings.”

As you’d imagine, much of Bardstown’s identity is tethered to bourbon.

“Until you’re 21, there’s nothing to do around here,” explains Wes. “It’s mostly bars, distilleries, and alcohol-themed businesses. Everyone around here is always making bourbon or doing tours, so until you’re 21, you really don’t have much to do. There is a skating rink that I spent a lot of time at… I think they closed that down recently. There are a couple museums. A lot of the time, you’d drive out to Walmart and spend a couple hours there just to walk around and look at stuff,” he sighs. “I know a lot of people make memes about that, like, ‘Oh, you’re from one of THOSE small towns.’ Yeah. We go to Walmart for fun, and then we go down and just ride around town.”

It is an easy place to lose yourself, to drift, and perhaps just acquiesce to staving off boredom and seeming lack of opportunity in the short term. Wesley Gilpin refused to settle for that path.

“I saw a lot of the things, people getting hooked on drugs and not going anywhere, violence, and I didn’t want to see that. I wanted to see the world, I wanted to travel, and the only way to travel and see the world is to have a well-paid job and a lot of skills that you can’t get from just walking around Bardstown.”

To illustrate how hard it can be to make such dreams happen in a small economy, Wes explains the trap he found himself in as he pushed for more.

“I was working at McDonald’s, and they didn’t want to pay me that much because it’s McDonald’s. And I was working so much that I didn’t have time to really focus on school, so I was losing a lot of motivation for school. And by the time it got to the end of the semester, I was almost failing, just couldn’t do it. So I quit. I quit McDonald’s, didn’t have a job for a while, and kind of fell on into a rut, really. Just didn’t have money to pay for gas to go to school, didn’t have school to keep me interested in what I was learning.”

Enter the Metallica Scholars grant and some extra funds that helped Wes bridge this most fundamental of struggles to get back on the college horse.

“That little bit of extra cash eased my burden of paying for gas, paying for food, and getting to and from class. It allowed me to actually have time to study properly, to rest properly, to eat properly, and to help me get on with doing what I wanted to do instead of scraping by.”

And I have to ask, with the freedom and security such work will hopefully provide, what does Wes want to do, and where does he want to go?

“Probably over to Germany and England,” he starts, “mostly Europe… Ireland, Scotland. And definitely Norway. I definitely want to go over there and see the old temples and stuff, the Northern Lights. I’m a Norse Pagan, so I actually follow that belief system, that worship. For the longest time, I didn’t really believe in any religion. I grew up in a very religious family, but I felt like it was forced on me, and I don’t like things being forced on me. I like to find things at my own pace, and this is one of those things that I just, you know, happen to find.”

It is that quiet, steely determination that has seen Wesley Gilpin elevate himself from a local environment to a world brimming with opportunity, one which he has made happen, along with a little help from his Scholars-friends.

“My buddy Caleb from high school is actually in class with me. I think he might graduate before I do because he took some extra classes, but he’s been really supportive. When we first started classes, he drove me to school because I didn’t have my license yet, so he tried to make sure I got to class on time. And then my other friend from high school, Jeremiah, went to a university, and he’s working on a computer engineering/computer science degree.”

Being that the Metallica Scholars Program helped Wes on his path – and being that he is also a huge Metallica fan – it would be rude not to conclude by asking Wes what Metallica music ticks his boxes most?

“It’s really hard to pick just one thing, but ‘Enter Sandman,’ and ‘For Whom the Bell Tolls’ are two big ones. For as long back as I can remember, my mom has always loved ‘Enter Sandman.’ That’s been a big song for just us. We listen to it. She listens to it all the time; I listen to it all the time. It really is kind of like a lullaby, like it’s not gonna put me to sleep, but it’s more of a relaxing kinda song, even though I don’t think it’s meant to be.”

Wes’ final words before we conclude our chat bring us back to the top of the story, as he makes a final affirmation of what is a life mission.

Wesley Gilpin is on his way and then some. Amen, brother.